[ABSTRACT] We report dynamic Monte Carlo simulations of polymer crystallization confined in thin films of thicknesses comparable to the polymer-coil sizes. We considered two contrasting affinities of the walls to the polymers, namely sticky walls that arrest the movement of polymers in contact with the substrate (such adsorbed layers allow to avoid dewetting) and slippery walls reflecting neutral repulsion of polymers. We found that at high temperatures slippery walls slightly enhance the crystallization rate with the decrease of film thickness, and the surface-assisted crystal nucleation results in dominant edge-on lamellar crystals (chain axis parallel to the wall); on the contrary, sticky walls significantly depress the crystallization rate, and the random crystal nucleation yields preferentially flat-on lamellar crystals (chain axis normal to the wall). The growth of self-seeded crystals demonstrates that the flat-on dominance is a kinetic phenomenon due to a stronger restriction on the thickening growth of edge-on lamellar crystals. 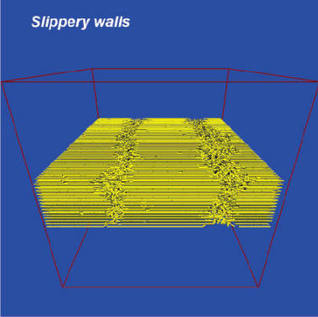 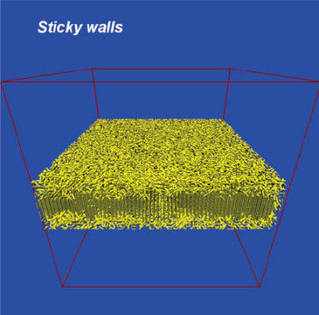 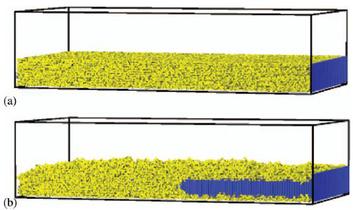 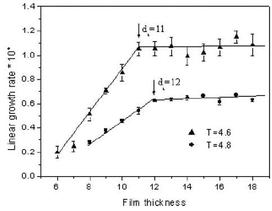 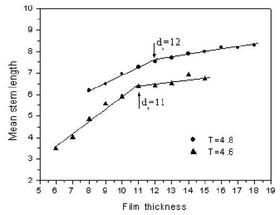 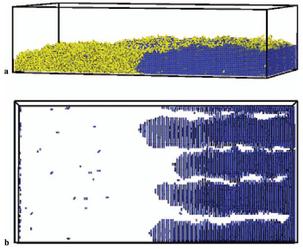 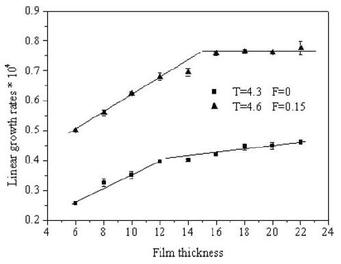 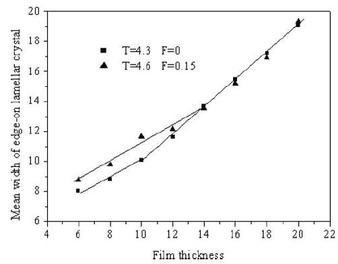 [ABSTRACT] Structural relaxation and physical aging in glassy polymer films have attracted much attention in the past two decades due to their strong correlation with the lifetime of polymer-based nano-devices. Currently, the observed physical aging in polymer films was explained on the basis of a free volume diffusion model (FVDM) that has not yet been validated by simulations at the molecular level. Here we performed a Monte Carlo simulation by introducing the vacancy diffusion mechanism (similar to FVDM) to investigate the structural relaxation in ultrathin polymer films. The results show that the local average density of segments increases linearly with the logarithm of time, similar to the fluorescence intensity and dielectric strength measurements in experiments. The responses of relaxation rates in ultrathin films to temperatures are consistent with that for glassy polymer thin films in experiments. The emergence of a peak of relaxation rates with decreasing temperature can be attributed to the competition of two mechanisms (segment mobility and accurate initial vacancy concentration) from the molecular levels. Our results demonstrate that the simulations with a vacancy diffusion model could indeed provide new insights from the molecular levels to understand the structural relaxation and physical aging in ultrathin polymer films.

[ABSTRACT] We demonstrate with molecular simulation that the acceleration of structural relaxation, also known as physical aging, commonly experimentally observed in thin polymer films slows down at extremely small thicknesses. This phenomenon can be attributed to an inversed free volume diffusion process caused by the sliding motion of chain molecules. Our findings provide direct evidence of the relationship between the sliding motion of short chain fragments and the structural relaxation of ultrathin polymer films, and also verify the existence of a new confinement effect at the nanoscale.

[ABSTRACT] We performed molecular simulations of polymer crystallization confined in rigid nanotubes. We found that the neutrally repulsive walls of nanotubes enhance the crystal nucleation. This enhancement gives uniform crystal orientation parallel to the tube axis at high temperatures. However, the nanotube walls that are wetted by the polymer, i.e. ‘sticky’ walls, switch the dominant crystal orientation from parallel to perpendicular. Since only perpendicularly oriented crystals can grow along the tube to give high crystallinities, the sticky walls provide a promising route towards the mass production of uniformly oriented nanocrystals in quasi-one-dimensional polymer systems. 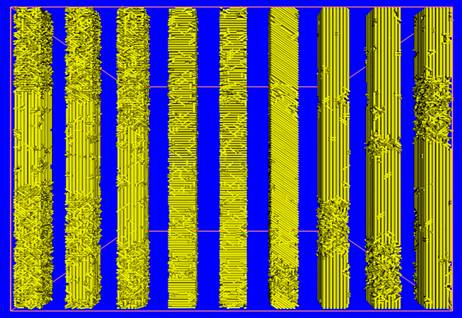 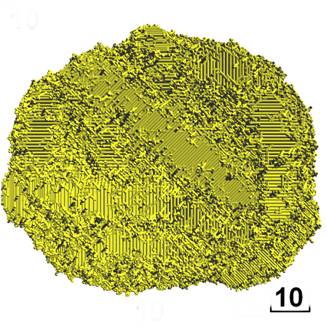 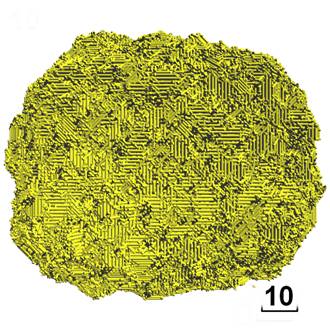 [ABSTRACT] Crystallization confined in the microdomains of diblock copolymers represents the strategy of “structure-in-structure” self-assembly in the hierarchical fabrication of polymeric nano-materials. This review is a survey on the molecular-level understanding of crystallization confined in lamellar, cylindrical and spherical microdomains of diblock copolymers. Separate situations such as hard confinement, soft confinement and double crystallization are discussed, and the simulation results are compared with the relative experiments. The confinement effects on guiding the preference of crystal orientations were interpreted. Molecular simulations were proved to be a useful tool in understanding such a delicate fabrication of nano-materials.

[ABSTRACT] We report a numerical study of the primary crystal nucleation of diblock copolymers in a lamellar phase. Only one of two polymer blocks is crystallizable; the other is maintained in glassy state. We find that crystals in this lamellar geometry tend to nucleate with the chain axis perpendicular to the lamellar plane. However, if in the same lamellar structure, we break the junction between the crystallizable and non-crystallizable blocks of the polymers, we find that crystallites tend to align parallel to the lamellar plane. This observation clarifies the molecular origin of the competition between parallel and perpendicular crystallite orientations in real block-copolymer systems. 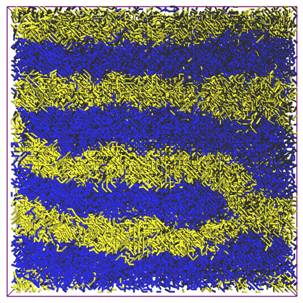 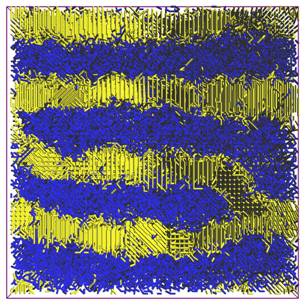 [ABSTRACT] A numerical study of microdomain coalescence induced by the soft-confined crystallization of lamellar diblock copolymers has been reported. It was found that under high temperatures those crystallites showing their orientational preferences perpendicular to the lamellar microdomains are responsible for the occurrence of coalescence, whereas the segregation strength just plays a subsidiary role. In addition, the lamellar microdomains are well preserved with undulations at the stage of primary crystallization but be broken out by the crystal thickening at the subsequent stage of isothermal annealing. Down with the temperature, there exists an abrupt transition from perpendicular to random in the preference of crystallite orientations. Annealing the nascent crystals of variable orientational preferences demonstrates that at low temperatures a randomization in the crystallite orientations may prevent microdomains from coalescing. The mechanisms of undulation and coalescence were thus discussed on the basis of the microphase-interface tension enhanced by the crystal thickening. 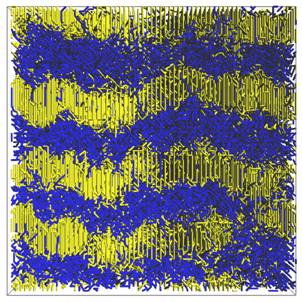 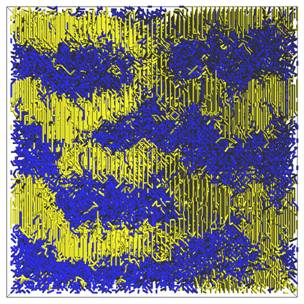 [ABSTRACT] We report dynamic Monte Carlo simulations of polymer crystallization confined in the cylindrical microdomains of diblock copolymers. The microdomains were prepared via spontaneous microphase separation from homogeneous melt, and the major component was then frozen in a vitreous amorphous state to make a hard confinement to the crystallization of the minor component. We found that during the isothermal crystallization at high temperatures, crystal orientations are dominantly perpendicular to the cylinder axis at the early stage of crystal nucleation and remain to the final state; while if the block junctions are broken before crystallization, crystal orientations are dominantly parallel at the early stage of crystal nucleation, and eventually other orientations take the place of parallel preferences. Analysis of bond orientations in the heterogeneous melts demonstrates the microscopic origin of oriented crystal nucleation. 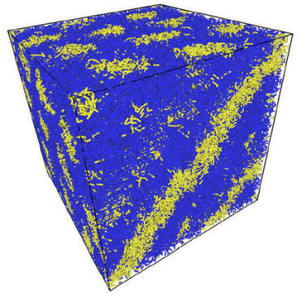 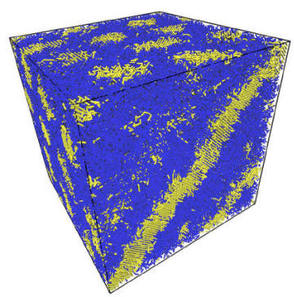 [ABSTRACT] We report dynamic Monte Carlo simulations of polymer crystallization confined softly in cylindrical microdomains of diblock copolymers. We observed both the breakout that generally raises coalescence of microdomains and the breakdown that uniquely turns cylinders into strings of single crystallites. They can be monitored by the disappearance of structure factors at the wave vector of the square root of seven with reference to the highest peak of structure factors. By comparison of two cases with and without the postgrowth crystal thickening, we found that for those tilted or perpendicular-oriented crystals in cylinders their postgrowth isothermal thickening makes the breakout, while their lateral crystal growth is responsible for the breakdown if the growth thickness goes beyond the thickness of cylinders. The results may facilitate our better understanding of the morphological control in the crystallization of cylinder-forming diblock copolymers. 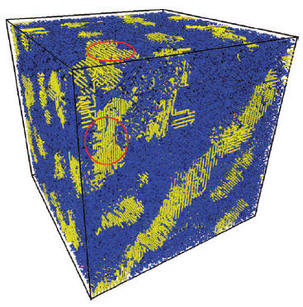 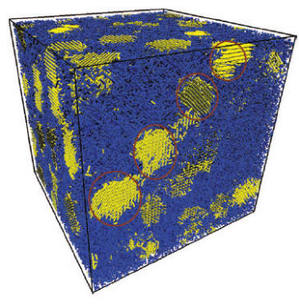 [ABSTRACT] We report dynamic Monte Carlo simulations of crystallization under hard confinement of spherical diblock copolymers. We compared the parallel results of blocks with short chains made by breaking block junctions. We observed that blocks crystallize faster but harvest lower crystallinity than short chains, which is in agreement with recent experiments. We found that the fast crystallization can be assigned to the slightly stretched blocks, and the lowered crystallinity is mainly attributed to the frozen block junctions near interfaces. In addition, homogeneous crystal nucleation at low temperatures switches Avrami indexes of both cases from one (first-order kinetics) to 0.5 and meanwhile ruins uniform crystal orientations inside each microdomain. Our present results may facilitate our better understanding of the fabrication of polymer nanocrystals through self-assembly of diblock copolymers. 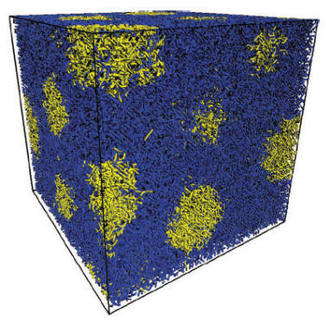 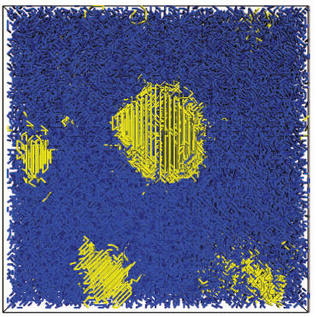 [ABSTRACT] Quasi-one-dimensional fibril crystal growth of diblock copolymers is a fundamental issue in the investigation of nanotechnology and neurodegenerative diseases. We performed dynamic Monte Carlo simulations of lattice polymers to study the crystallization-driven fibril crystal growth of diblock copolymers under two circumstances of solutions: sporadic crystals with the feeding mode of constant polymer concentrations, and massive crystals with the depleting mode of decaying polymer concentrations. We confirmed anisotropic driving forces as a prerequisite of steady growth of fibril crystals. The lamellar crystal width is confined by the noncrystalline block below a critical concentration that shifts down with the decrease of the noncrystallizable block fractions. In the depleting mode, the long-axis sizes at the early stage of fibril crystal growth can be fitted well by an exponential-decay function of time, and the growth rates decrease linearly with polymer concentrations by following the growth rates in the feeding mode, appearing as consistent with our previous simulation results of homopolymer solutions.