Some applications of Flash DSC

First commercialized chip-calorimeter was made by Mettler-Toledo AG. 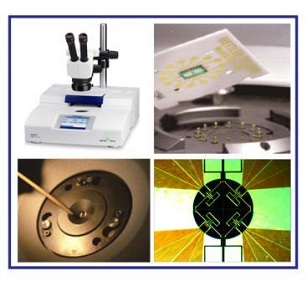 [ABSTRACT] Reversible and irreversible melting of lamellar polymer crystals have been studied by means of combining fast-scan chip calorimetry of polymorphic isotactic polypropylenes with dynamic Monte Carlo simulations of polymer chains on a lattice. Different polymorphic phases of polypropylenes are linked to variation of the chain mobility in the crystals of the same species, and this mobility appears as an adjustable parameter in parallel molecular simulations. Such a combination of two different approaches having complemental advantages facilitates a better understanding of the complex phase transition behaviors of lamellar polymer crystals.

[ABSTRACT] We studied the power-law heating-rate dependence of superheating for the melting of alpha- and beta-crystals of isotactic polypropylene by means of chip-calorimeter, and expanded our parallel observation to higher heating rates by means of molecular simulations. We observed that, at low heating rates, the melting of lamellar crystals after thickened via melting-recrystallization exhibits no power-law-dependent superheating; at medium heating rates, the melting of crystals after thickened via chain-sliding diffusion exhibits the power-law-dependent superheating with the power indexes sensitive to chain mobility in the crystals; while at high heating rates, the zero-entropy-production melting of crystals without further thickening maintains the power-law-dependent superheating but with the power indexes uniform at an upper-limit 0.375. We attributed the index 0.375 to a result combining local intramolecular nucleation and global roughening growth at the lateral surface of lamellar crystals, which dominate the kinetics of crystal growth and melting of polymer crystals at high temperatures. 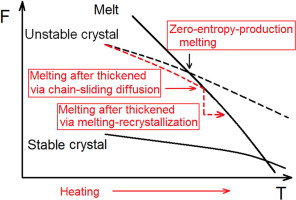 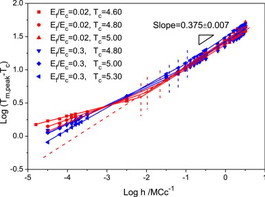 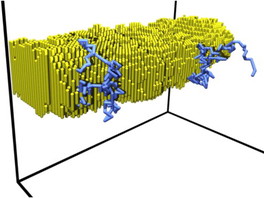 [ABSTRACT] Reversible melting is a phenomenon unique to polymer crystals, which raises an excess reversing heat capacity near their melting points. By means of temperature-modulated differential scanning calorimetry (TMDSC) measurements with an expanded frequency range in chip-calorimeter, we studied reversing heat capacities of alpha- and beta-form crystals of isotactic polypropylene. We attributed their differences at high temperatures and low frequencies to variable chain mobility in these two crystals. We further performed parallel dynamic Monte Carlo simulations of lattice polymers with variable chain mobility in the crystals to confirm this attribution. Our observations provide the first evidence on the role of chain mobility in the microscopic mechanism of reversible melting at the fold-end surfaces of lamellar polymer crystals. 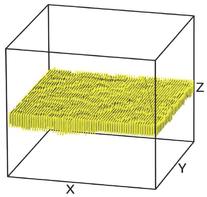 Some Applications of Flash DSC

[ABSTRACT] We employed fast-scan chip-calorimeter (FSC) measurement (Flash DSC1) to study the melting of syndiotactic polystyrene after melt-crystallized at various cooling rates as well as after isothermally crystallized at various high temperatures. We attributed the observed double melting peak to a melting-recrystallization process of beta-form crystals upon heating, as evidenced by their variations with different cooling and heating rates. Our experiments demonstrated the advantages of FSC techniques in the investigation of crystallization and melting behaviors of polymer materials.

[ABSTRACT] The vital role of chain ends in the crystallization of linear polymers can be understood by unraveling the mechanisms of crystallization of cyclic polymers. A commercial chip-calorimeter Flash DSC1 was employed to compare the nucleation and overall crystallization rates between linear and cyclic poly(epsilon-caprolactones) (PCL) with similar molar masses of around 2 kg/mol. In the high temperature region, faster overall crystallization of cyclic PCL relative to linear PCL is consistent with previously reported results employing conventional DSC. In the low temperature region, the cyclic PCL exhibits a lower onset temperature of homogenous nucleation when compared to linear PCL analogs. This result was attributed to a higher mobility of free chain ends in the linear PCL as compared to cyclic PCL. A simplified data-treatment method on the nucleation half-time has been proposed. 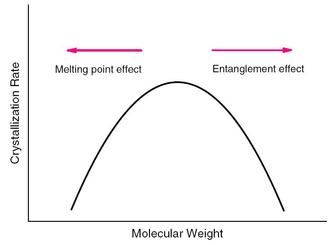 [ABSTRACT] We employed commercially available chip-calorimeter Flash DSC1 to investigate the low-temperature crystallization behaviors of random copolymer P(VDF-TrFE-CFE) (poly(vinylidenefluoride-trifluoroethylene-chlorofluoroethylene)), and compared them to the parallel results of P(VDF-TrFE). The resulted ferroelectric crystalline phases were identified by WAXD and FTIR. We found that, although our P(VDF-TrFE-CFE) contains higher content of VDF sequences than our P(VDF-TrFE), it performs crystallization of the ferroelectric phase at low temperatures much slower, and even exhibits cold crystallization upon heating back from fast cooling. We attributed the slowness to the effect of chemical confinement of large CFE comonomers. Our results facilitate better understanding of structural optimization for the electroactive applications of PVDF-based random copolymers. 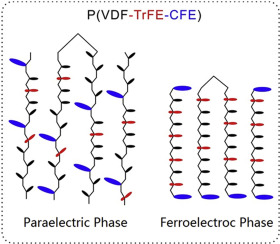 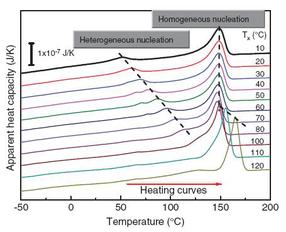